The Wanders Football Club achieved greatness by winning the first ever FA Cup final in 1872. Now, 150 years later, a new trophy – the Avogadro Trophy – has just be won for the first time. Named after Lorenzo Romano Amedeo Carlo Avogadro, Count of Quaregna and Cerreto, the Italian scientist synonymous with the incredibly large number 6.02 x 1023, the Avogadro Trophy is awarded to the winner of the Long Road Sixth Form College Titration CompetitionTM. This analytical chemistry contest examines participants physical skill, patience, precision and understanding of stoichiometry, using a common but essential set of practical techniques.

Five teams entered 2022s inaugural contest (to find the molecular mass of an unknown acid) and a brief summary of the highlights is outlined below.

The team comprising Aysha Rehman and Michelle Munowenyu set the pace to follow early on; efficient preparation of a standard solution and excellent volumetric pipetting ensured they made rapid progress. They were closely tracked by Josh Marhsall and Amy Cronshaw, who made no fuss about completing their first few titrations with excellent data recording procedures on display. Lucy McConville also made quick early progress with a calm and focussed approach, which seemed to be paying dividends. Working in a more voluble corner of the lab, Ben Stratton and Tamim Siddique also quickly overcame the early hurdles, with Siddique showing remarkable confidence to fill the volumetric flask from a wash bottle in record time, the meniscus sitting perfectly on the calibration line.

Disaster struck early for Teammates Bilal Omer and Ehsan Chowdury; a flask was over-filled, water covered the bench at times and a pipette ended up clamped in the burette stand! However, upon restarting, the pair began to fire on all cylinders and started adding pressure on the neighbouring teams. Marshall and Cronshaw stayed calm under this pressure and their titres kept coming. Meanwhile, Rehman and Munowenyu mastered the colour change and McConville began to close in on concordant results. The competition started to look closer and closer as more titres were calculated; Stratton and Siddique were reaching full stride but titrating with a funnel in the burette and out of nowhere, Omer and Chowdury snaffled five titres.

As the first hour mark came into view, the lab was filled with the sound of frantic final titrations and one after another, the teams recorded concordant titres – the fundamental benchmark of an accomplished chemist. Unbeknown to them at the time, Cronshaw and Marshall recorded exactly the same concordant titres as the judges and looked on course for a stunning victory.

The final few minutes of competition saw a change in pace, inherent in this format. Calculations were needed to determine the mass of the unknown acid with Rehman and Munowenyu amongst the early starters, although it was McConville who really strode ahead with confident use of equations and stoichiometry. Siddique and Stratton also began to close in on the right answer with Omer fighting back hard to prevent marks being lost; this was going to be close. When the judges stepped in to draw proceedings to a close, there followed a nervous few minutes while scores were determined.

For most teams, the calculation proved the biggest challenge. Yet while Stratton and Siddique hit the nail on the head by getting the molecular mass of the acid exactly correct they couldn’t overhaul the expert titration skills of Marshall, Cronshaw and McConville. Despite maximum possible marks from the judges for the practical work of Marshall and Cronshaw (which surely would result in the trophy in any other year??) they fell just short and Lucy McConville emerged as the very worthy first winner of the Avogadro Trophy.

Congratulations should go to all the competitors however; this was a challenging competition and the titrations were well performed by every team, and it turned out to be a very close result. Indeed, all teams secured over two-thirds of the available marks and the participation of these students has helped establish the competition for the future. 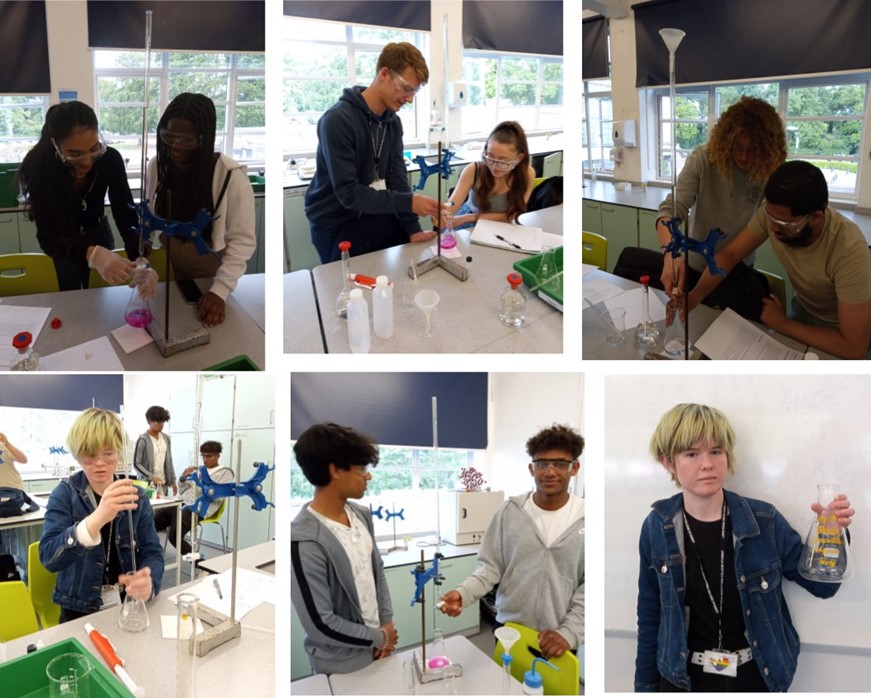